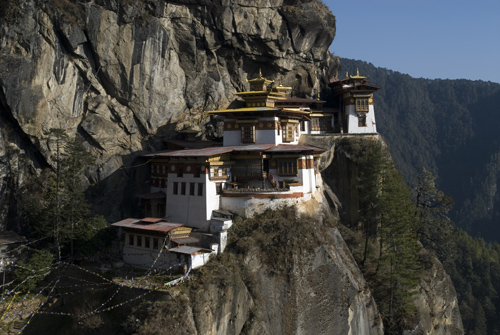 In an unforgettable flight giving you an adrenaline rush as you see views of Mount Everest, Kanchenjunga and other famous Himalayan peaks, including the sacred Jomolhari and Mount Jichu Drake, you will land at Paro International Airport. The landing at Paro, considered one of the most challenging will also be an enthralling experience.

Our company’s representatives will receive you at the airport. After a brief stopover in a hotel, your Bhutanese expedition will begin with visits to places of historical importance in Paro.  It will be the National Museum of Bhutan, the Majestic Paro Rimpong Dzong and Kyichu temple, one of the oldest temples in Bhutan built by King Songtsen Gyempo of Tibet in 659AD.

In the evening, you will drive to Thimphu, Bhutan’s capital and visit the majestic and historic Tashichho Dzong, the main secretariat building, built in 1642. Today, this massive structure houses the office of the King, the Throne Room, some government Ministries and the State Monastic Body. It is also the summer residence of the Chief Abbot and senior monks. Night halt will be at a hotel in Thimphu.

Thimphu has a lot to offer and your day will begin with visits to the Memorial Chorten, one of Bhutan’s most beautiful stupas built in memory of the Father of Modern Bhutan, Third King Jigmi Dorji Wangchuck. The next visit will be to Buddha Point, where stands the gigantic world’s largest Buddha Statue. You will then move to the 12th century Changangkha monastery, followed by the Takin Zoo and a drive to Sangaygang, a point from where you can have a bird’s eye view of Thimphu valley.

From there we move to the Handicraft’s center, the Local Bhutanese Paper making factory, a Nunnery and the Arts and Craft School.

Your journey to Punakha, which is about 3 hours, will then begin. In about 45 minutes, you will reach the Dochula Pass (3,100m), from where visitors on a clear day can have a breathtaking glimpse of the eastern Himalayan range that consists of snow capped peaks with elevations ranging from 6000m to 7554m. Apart from this, the 108 stupas (chortens) at Dochula pass add to the beauty of the pass. The Pass is also exotic in flora and fauna.

The onward drive is a gradual ascend through beautiful forests of rhododendron and fields of dwarf bamboo, green meadows, beautiful wildflowers, gushing waterfalls and constantly changing vegetation. Lunch will be served at Lamperi.

Two hours further is Punakha, which was Bhutan’s capital until 1955 and still is home of the Chief Abbot during the winter months. Punakha Dzong (Fortress), built in 1637 by Shabdrung Ngawang Namgyal, stands like a giant ship on an ocean from afar. Build at the confluence of two rivers, Pho Chhu (male river) and Mo Chhu (female river), the Dzong was destroyed four times by fire and an earthquake in 1897. However, it has now been restored to its original splendor. The Dzong is an epitome of Bhutanese architecture.

Before reaching Punakha, you will visit the ruins of Wanduephodrang Dzong (Fortress), which was destroyed by a tragic fire in 2012.  It was built in 1638 by the Zhabdrung.

Night halt will be at a hotel in Punakha.

It will be an early morning four hour drive back to Paro. On the way, you will visit Chimi Lhakhang, a 15th century temple dedicated to Lam Drukpa Kuenley (Divine Madmonk), where the Phallus is still worshipped. Barren women receive blessings from a Phallus.

You will then halt at Dochula Pass and have a last glimpse of the beautiful peaks and stupas.

After a brisk break at Paro, we will drive to start the hike to one of Bhutan’s most sacred and religious heritage, Taktshang Monastery or the “Tiger’s Lair.” Perched some 1000 meters on a hill overlooking a valley, it is believed that the great Indian Saint and Budddhist Master, Guru Padma Sambhava flew on a tigress in a wrathful form to this place in 746 AD, to subdue evil forces who were obstructing the spread of Buddhism. The trek, which will take about five hours (up and down) is an unforgettable one and promises every visitor an enthralling experience.

The evening will be dedicated to visiting ruins of the Drugyel Dzong,”Castle of the Victorious Drukpa” located 16 Km. from the Paro town, which was built to celebrate the victory of the Bhutanese forces over the invading Tibetan troops.  On a clear day, one can view Mount Jomolhari (“Mountain of the Goddess”) standing at an altitude of 7,329m/24,029ft.

You could take a leisurely walk through Paro town in the evening.

After breakfast, you will be driven to Paro international Airport for your flight out of Bhutan.