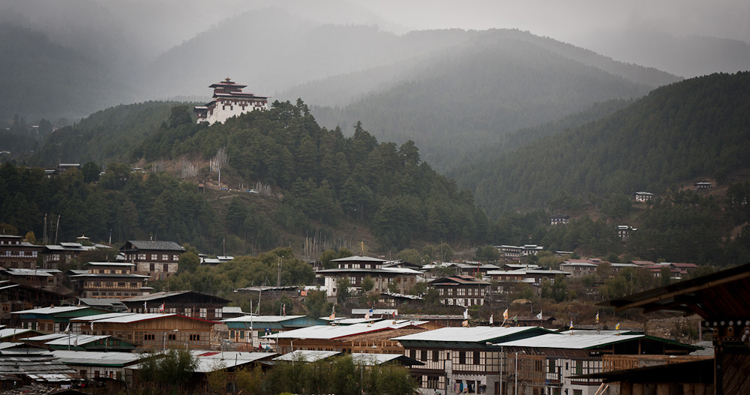 Other places: Western and Central Bhutan.

BOOK THE ITINERARY
The Naked Dance of Jampa Lhakhang Drub is one of the most unique amongst scared mask dances held around the country. At midnight, 16 naked men perform the sacred dance, which has its origin in the 8th century.

It is said that the dance was first held in Nabjikorphu  in Trongsa by the great treasure discoverer, Tertoen Dorji Lingpa, on the prophecy of Guru Rinpoche.  Like several dances, this has a story, too.

Legend has it that a band of devils were obstructing the construction of a Lhakhang (Temple) in Nabjikorphu, delaying the work. As a ruse and to distract the devils, Terton Dorji Lingpa launched the naked dance. It served the purpose as the outrageous antics of the naked performers during the dance kept the devils spellbound. The construction was thus completed. The dance reached Jampa lhakhang as Terton Dorji Lingpa also consecrated Jampa lhakhang.

This dance is performed by selected men from the four villages of Jampa lhakhang, Nobgang, Changwa and Nashphey.

The main high light of this festival is ‘the scared naked dance known as Ter Cham and Mewang-the fire blessing’. A fire dance orMewang is held in the evening to bless the infertile women so that they may bear the children.

During the journey to Paro, one will experience a breath taking view of Mount Everest, Kanchenjunga and other famous Himalayan peaks, including the sacred Jomolhari and Mount Jichu Drake in Bhutan. Particularly exciting is the section through the Bhutanese foothills and the thrilling landing. On arrival at Paro International Airport, you will be received by representatives of our company. After checking in and lunch you will visit places of historical importance in Paro, such as the National museum of Bhutan, and Paro Rimpong dzong. You will also be visiting Kyichu temple, which was built by King Songtsen Gyempo of Tibet in 659 AD.

After an early breakfast drive up to the Ramthangka (base camp) of Taktsang and then hike up to the famous Tiger’s Lair.

It is a 5 hour round trip. Follow an ancient path marked by river powered prayer wheels to the monastery, perched some 1000m/3,000ft up on a cliff overlooking the valley. It is said that the legendary Indian saint, Guru Padma Sambhava, flew from Tibet on the back of a tiger to defeat five demons, who were opposing the spread of Buddhism in Bhutan in 746 A.D.

On the way back, visit Drugyel Dzong, located 16 Km. away from Paro town. Although in ruins, this Dzong is of great historical importance. It was here that the Bhutanese finally defeated the invading Tibetans and drove them back. From here, Jomolhari peak or “Mountain of the Goddess” can be seen on a clear day (Alt. 7,329m/24,029ft.).  If time permits, we will visit a local farmhouse. Overnight at the hotel

The three to four-hour drive from Paro traverses thorough a constantly changing kaleidoscope of vegetation, waterfalls, flowers, mountains and meadows. In about 45 minutes we will reach the famous Dochula pass (3,100m) where on a clear day we can see the entire eastern Himalayan range, teeming with 6,000m to 7,554m snow-capped mountains. The pass also known for its abundant species of extremely beautiful flowers has 108 Buddhist stupas exquisitely built around a mound, adding to the natural splendour of the place.

After lunch in a small nearby village together with a rural farming household, we will walk along a footpath flanked by an endless view of ripening paddy fields to the Temple of Fertility – Chimi Lhakhang. This temple, built in the 15thcentury to honour the “Divine Madman”, a saint iconoclast who is also associated with phallus worship, attracts barren couples from all over to receive fertility blessings from an anointed phallus.

After breakfast, we will drive to Phobjikha- a bowl-shaped valley on the western slopes of the Black Mountain. After lunch, we will visit Gantey Goenpa, seat of the Peling tradition of Buddhism. Later walk around the valley which is also the winter home to the rare black-necked cranes, which migrate, from remote parts of Tibet, China and Siberia during winter to this valley.

Overnight will be at hotel.

Day 05: Phobjikha-Bumthang: After breakfast, we drive to Bumthang via Pelela pass, the traditional boundary between Western and Eastern Bhutan. En-route we will stop at Chendebji, where a stupa built by King Zhida stands.

Chakhar Lhakhang (Iron Castle): It is the site of the palace of the Indian King Sendha Gyab also known as Sindhu Raja.

Kurjey Lhakhang (Kurjey means, “Body imprint”): The temple to the right was built by Minjur Tempa in 1652. It was built around the cave in which Guru Rinpoche meditated and left his body imprint.

Tamshing Lhakhang: This temple is also known as Tamshing Lhendrup Chholing (Temple of the Good Message).

Jakar Dzong. The fortress is now used as an administrative center of the valley and summer residence of monks. Later in the evening witness the festival. The first day of the festival begins in the late night.

Later in the evening, we will witness the festival. The first day of the festival begins late at night.

Apart from the Naked dance, another attraction unique to this festival is the  Fire Dance (Mecham), where an arch of pine is set on fire. The fire is said to purify the earth of evil spirits. People who pass through the arch have their sins cleansed. A dancer chases away the evil spirits.

Night in the hotel.

After breakfast, we will attend the second day of Jambay Lhakhang Drup (festival) and after lunch, we will drive to Tang valley to visit Mebar Tsho (Burning Lake.) Legend has it that the great Terton (Treasure Discoverer) found several religious artefacts hidden by Guru Rimpoche in the lake.

Night halt will be in the hotel.

After breakfast we drive to Trongsa. Upon arrival there, we will visit Trongsa Dzong – seat of the district administration, built in 1648. We will also visit Ta Dzong (former Tower), which has been converted into a museum.

Overnight at hotel in Trongsa.

Overnight at hotel in Thimphu.

In the morning we will visit places of cultural and historical office in the capital.

Memorial Chorten (Stupa): Your day will begin with visits to the Memorial Chorten, one of Bhutan’s most beautiful stupas built in memory of the Father of Modern Bhutan, Third King Jigmi Dorji Wangchuck.

Buddha Point: The next visit will be to Buddha Point, where the gigantic Buddha Statue stands.

Changangkha Lhakhang: A 13th century monastery, built by Phajo Drugom Shigpo and later embellished by his son Nyima, the monastery is believed to be the protector of all people born in the Chang valley.

Others: We will also be visiting the Takin Zoo, taking a drive to Sangaygang, a point from where you can have a bird’s eye view of Thimphu valley, Handicraft’s center, the Local Bhutanese Paper making factory, a Nunnery and the Arts and Craft School.

Tashichho Dzong: The country’s main secretariat building, built in 1642, it is today the hub of Bhutanese polity. This massive structure houses the office of the King, the Throne Room, some government Ministries and the State Monastic Body. It is also the summer residence of the Chief Abbot and senior monks.

Day 11: Departure from Paro: After breakfast, you will be driven to Paro international airport for your onward flight. Our representative will see you off.